The National Anthem holds significant historical and moral importance for many Americans. It is a symbol of our freedom and a reminder to honor those who fight to protect our freedom. So for many people, what Colin Kaepernick did, is more than just tendentious, it is entirely un-American.

If you’ve somehow escaped this catastrophic, apocalyptic, incessantly aggravating story, then let me just say, congratulations. I truly envy your bliss. For those that don’t know, Colin Kaepernick is a black Quarterback for the San Francisco 49ers of the NFL. During a pre-season football game, Kaepernick was seen sitting down during the National Anthem instead of standing up with his hand over his heart like the rest of his teammates. When asked why this was, Kaepernick explained that he was protesting the oppression of black Americans and would continue doing so until changes are made toward ending racial oppression in the United States. Well, you know Americans, this action resulted in a thoughtful, respectful, meaningful debate about the struggles of black America and how to reform our policing in terms of racial prejudice. Haha! Just kidding! 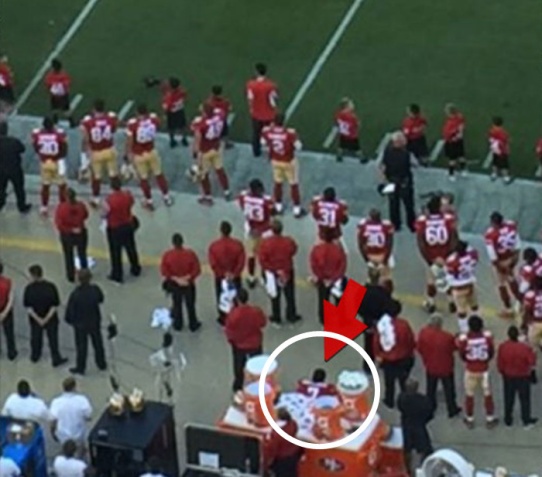 Our mainstream news/media organizations tend to grovel to the masses for clicks, shares, and retweets. Instead of presenting the issue objectively, the media tends to sensationalize the subject matter in order to generate the most “buzz” (although the blame for all of this lies with us). As such, the media has eagerly covered the controversy, turning the focus away from the primary message of race relations and into a right-wing, patriotic circle-jerk. Americans who caught the story on the news chose to weigh in on the debate, which ultimately resulted in name-calling, self-righteous aggrandizing, ignorant criticism and just utter bullshit being spewed in every direction. This happens after every “controversy”, as people are fervently keen to have their own beliefs validated by others on the internet, instead of actually, you know, trying to learn anything or attempting to understand the other person’s perspective. Well obviously, the true “patriots” of this country were/are very upset about what Kaepernick did. They claim that the QB isn’t a true American, that his actions are disrespectful to our troops and that his gesture was an affront to those that served. Kaepernick put his own beliefs ahead of his country, he went against our nationalistic pride. So yeah, I understand the anger some people feel towards him, but patriotism is nuanced. It isn’t just about wearing a cowboy hat and waving an American flag. It isn’t just about driving a pickup truck while chugging bud lights. It isn’t just about three white girls in bikinis having a pillow fight in a hot tub, as a golden eagle flies overhead dropping assault weapons onto the crowd while a speaker blasts Bruce Springsteen. Patriotism can also mean loving your country so much, that you’re willing to point out your nation’s flaws and work towards improving/fixing them.

The National Anthem is the embodiment of patriotic zealousness. It is played before every game because sports is supposed to be about rising above the conflicts of our time and uniting together for the love of our country. When one enormous, steroid monster crashes into another player giving him permanent brain damage, that action, for a fleeting moment, allows us to forget everything that divides us. That song about our star spangled banner honors our unity in supporting those that fight for our country. Kaepernick may have threatened our narrow idea of patriotism and our nationalistic unity, but that’s not why people are angry, they’re angry because he threatened white privilege.

Just look at what Sean Hannity, proud Trump supporter/advisor and a Fox News anchor, who recently claimed that he was in fact, not a journalist, had to say about the situation:

Hannity: [Kaepernick] lives in a place that should be praised for overcoming its wrongs and injustices, and having the freedom for its people to rise up for the better and change the country, because of a system put in place by our framers and our founders. But that doesn’t fit his little — you know, socially fashionable, and relevant and melodramatic pretense that he has out there. You know, his version, I guess, of the March on Selma. $128 million march on Selma.

HANNITY: There was one — I don’t know, I’ve never been able to confirm this, I looked earlier today, that he might have converted to Islam in the off-season.

Ah yes, he’s a Muslim, he must be, now it all makes sense! I should note that Kaepernick is not a follower of Islam. This ridiculous claim is entirely false and entirely unfounded.  This is the perfect example of the “silent America” that Donald Trump panders to. These are the white Americans who are afraid of Muslims, immigrants, anyone or anything that dares to threaten their beliefs. This subconscious fear stems from ignorance and untamed ignorance will always manifest itself into hate. White people are afraid/hateful of anything that threatens their superior societal position, while simultaneously denying this inherent privilege exists in the first place. This is why so many Americans want to build a wall to keep people out of the country (by the way, when these people figure out what a tunnel is, their minds are going to EXPLODE!). It is why many Americans refuse to even recognize the claims of BLM, let alone concede to the existence of racism/oppression in this country. To acknowledge these claims would legitimize white dominance and risk dissembling the privileges whites freely enjoy. A better way to put it would be that “most whites have a very limited understanding of racism because we have not been trained to think in complex ways about it and because it benefits white dominance not to do so.” (GoodmenProject) I should mention that I am white. I grew up in a sheltered, bubbled, privileged town with very few minorities. I cannot fathom what many poor, black, urban Americans go through each and every day. I have no problem in admitting that this country has failed minorities in the past and in the present. I continue to work on “checking my privilege”, not because I’m some liberal, white-guilt laden douchebag, but because I think all people should have the same equal opportunity as I do. That’s what equality truly is. It is not making sure everyone receives the same things (an array of socialists gasp in horror), equality is about everyone having the same opportunity to achieve those things. Minorities do not have these same opportunities. Women, blacks, LGBTQ, and every other minority face obstacles that white people do not face. We must remove these obstacles to ensure true equality.

Every day we hear about Trump, or Hillary, or white America’s problems. The media is making an enormous profit off of these topics. That’s not to say that the news doesn’t talk about racism, it does, a lot. However, racism may be at the forefront of the American media, but it is not at the forefront of the American ethos. We live our lives isolated from the realities of others and thus, we do not have the ability to change/take other’s perspective, to empathize with those who face discrimination. Colin Kaepernick wanted to bring attention back onto the perceived racial injustice that blacks face from the police. Instead of Americans talking about that issue, he was lambasted, ridiculed, blasphemed and treated like a terrorist. This country is still unable to have a real debate about race because millions of Americans refuse to acknowledge that racism actually exists.

Here are some insightful tweets on the matter from Doug Baldwin, fellow NFL player on a rival team. He puts it very eloquently:

We honor those who fight for our right to freedom of speech and then condemn those who exercise that right?

You have to stand/sit for what you believe in.

“How DARE he challenge what the flag means to me. I am the ONLY authority on this matter and defying me is unacceptable.” -Angry American

If you think that the protest is to disrespect the armed forces then I don’t know what else to say. You’ve clearly missed the message.

Now here are some tweets from Kaepernick dissenters who clearly missed the message (read at your own peril):

“Kaepernick is a terrorist” —

Has the #FBI put #Kaepernick on the No Fly List yet? He's #Muslim and won't honor the National Anthem. Potential terrorist right there.

Brain-dead Assclown Colin Kaepernick protests the police who protect him and the entire stadium while he makes millions playing a game.

A young boy, late for school, stops running and stands for the pledge. Colin Kaepernick makes millions and won't stand up. #respect #Merica

“He was raised by white parents, he isn’t even black!” (Black people have also said this) —

#Kaepernick would anyone know your name if you weren't adopted by white parents?

Something is very, very wrong with the parenting done by #Kaepernick white parents

Colin Kaepernick was given up for adoption and raised by WHITE family. Adoptive parents should disown him and change the locks in the house.